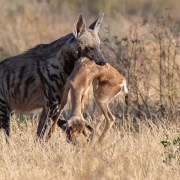 Samburu National Reserve is found in the north of Kenya in Samburu County, this park is relatively small in size covering an area of 165 square kilometers lieing at the altitude range of 800 to 1230 meters above the sea level. Samburu national park lies on the southern banks of Ewaso Ng’iro River and it is situated for about 350 kilometers from Nairobi town the most developed town in the region.

Samburu national park is dominated by different vegetation covers which spread across the regions of the park such as acacia, riverine forest, thorn trees and grassland vegetation. Ewaso Ng’iro River whose name is a local Samburu slag meaning brown water drains through the park, the river is an important source of water to the animals living in the park. On the borders of Samburu national park, there lives the Samburu community. The Samburu community is very important to the park as it is from it tribe that the park derives its name.

Samburu national park is a rewarding activity through a rugged and semi-desert terrain of the park consisting of low lying and semi-arid plains, Samburu hill and steep ravines. As you drive in the park you spot many animals such as beisa Oryx, herds of elephants, buffalo, leopards, zebras, lesser and grater kadu, hippopotamuses and many more. Animals in Samburu national park are best viewed around the banks of river Uaso Nyiro as the animals come to the river to drink water. Crocodiles and hippopotamus are viewed in river Uaso Nyiro.

Samburu national park offers fascinating culture encounters in the Samburu communities, these communities live on the out skirts of Samburu national park where you visit for cultural encounters. Samburu people are nomadic people who live a typical nomadic life style which is encountered when you visit their community, on your visit you witness many aspects of their life such as cattle and livestock grazing, making of beautiful traditional ornaments, milking of the livestock such as cows and goat and getting entertained by local dances and songs.

What is the best time to visit Samburu national park for a safari?

Visiting Samburu national park for a safari is possible throughout the year, on any day of the year you are to get a good experience in the park. For the great safari experience the best time to visit Samburu national park is in the dry season, dry season in the park is experienced in the months of July, June, August, and September to October. In this period there is clear blue skies, no heavy rainfalls and at times no rain falls. Due to less/ no rainfall water holes in the park dry and the animals are spotted in huge number crowding along the banks of Ewaso river as they come to drink water and quench their thirst.

Where to sleep in Samburu national park

Accommodation is a fundamental need while on your safari in Samburu national park, the park ranking as one of the best tourist destination in Kenya has many accommodation facilities which offer sleeping rooms for guests. They include elephant watch camp, elephant bedroom camp, Ashnil Samburu camp, Samburu Simba lodge, Samburu sopa lodge, Sentrim Samburu lodge, joy’s camp, Sasaab lodge, Samburu Serena lodge and many more. These lodges are available to offer you a hospitable stay.