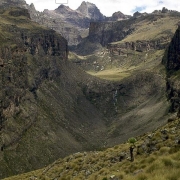 Mountain Kenya national park includes Mountain Kenya. This is Kenya’s tallest mountain and Africa’s second tallest mountain after Kilimanjaro. The mountain ranges 5199m in height, it is located in Kenya and the park was established in 1949 to protect Mount Kenya, the animal species and the surrounding sources and was designated in 1997/8 as a world heritage center by UNESCO, 137km away from the Nairobi Capital.

Because of its snow caped nature, the people of Meru call the mountain “kirikara” which translates to the white stuff in reference to the white peaks that cover mountain Kenya due to high elevation. The park covers an area of 715km (276 sq. mi). Mountain Kenya has got three (3) peaks/summits which attract a number of visitors in to the park. These include; summit Lonana, summit Nelion and summit Batian.

Depending on which one you choose to climb with the Batian being the highest peak of all with a height of 5,199metres.

It takes a minimum of 4days through the easiest route to point lonana and back via virimon route. An estimated number of 15000 visitors climb this park each year, 200 people are estimated to visit summit Nelion, 50 summit Batian and the rest on the lonana peak. Much as it can be climbed year-round, the best times for climbing Mountain Kenya are January to March and June to October. However, visitors should be aware of the rainy seasons that occur in the months of April, May and November as December is often drier, warmer and with clear skies but due to climate change, it has made it difficult to predict these seasons.

Costs to climb the Mountain Kenya.

There are so many activities to engage in while at the park these include; Game drives, Camping, mountain climbing, filming and photography, trekking, hiking, mountaineering name it.

As you plan to visit the park, remember to carry items like a bottle of drinking water, walking boots, binoculars, a pair of stockings, training shoes, sun glasses, a hat and guide books.

How to get there.

The park can be accessed by two main ways, road and air transport.

By air; the nearest airstrip to get to the park offering domestic flights is found at Nanyuki.

In conclusion, Mount Kenya is one of Kenya’s highly ranked and visited destinations around Kenya and its worth a visit.