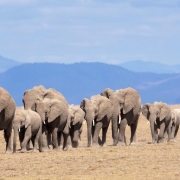 Amboseli National park big five: Amboseli national park is one of the most visited tourist destinations in Kenya, this park is ranked as one of the top national parks in Kenya only of because of its breathtaking scenery created by a back drop of the snow-capped mountain Kilimanjaro but also because of the huge population of wildlife habiting in the park. Amboseli national park is a home to many animals which include African elephant, buffalo, impala, lion, cheetah, hyena, zebras, giraffes, zebra, wildebeest and many more. These animals thrive in the swamps, Pleistocene lake and semi-arid vegetation which dominates the park.

Lions are one of the most sought for animals among the big five, lions are scientifically referred to as panthera Leo. There is no sight in the world can be as amazing and breathing as watching a lion the king of the jungle graceful roam in the short semi desert grassland of Amboseli national park. Lions in the park are found of hiding in a lengthy grass and outcrops while praying on their preys that is impalas, hyenas and other small animals found in Amboseli national park. Lions are large animals weighing between 150- 250 kilograms, in appearance female  are smaller and light than the male and the male are easily identified by the majestic dark colored manes around their head.

Lions are the largest of the carnivore clan, with the help of their strong legs they noted to be able to run a distance of 60 meters in a short time of 6-10 seconds. As a tourist intending to catch a sight of a lion in Amboseli park morning and evening time are the best time for spotting the lions, since these animals (lions) are fond of living short savannah grass they can easily be spotted in Amboseli national park.

Cape buffalo are the second largest among the big five coming second to African elephants, these animals are scientifically known as syncerus caffer and easily identified from shield of hard bones created by their bones. Those most of the big five are furious and dangerous animals, cape buffaloes are ranked as the most deadly of all the four in Amboseli national park, they are aggressive and dangerous animals that is why it is very advisable never to get close to them at any incident while in the park. it is because of the danger which might be inflicted on tourists in the park by these animals that tourists are only allowed to get out of their vehicle at the observation hill in Amboseli  park.

Cape buffaloes at times resemble cows but their out ward curved shield like horns make them different from cows, these animals have wide shoulders and huge hooves in their front legs which help them adopt to swampy vegetation of Amboseli national park. Cape buffaloes in Amboseli park are spotted moving through the short grass cover of the park grazing in a large population of approximately 30-50 individuals. 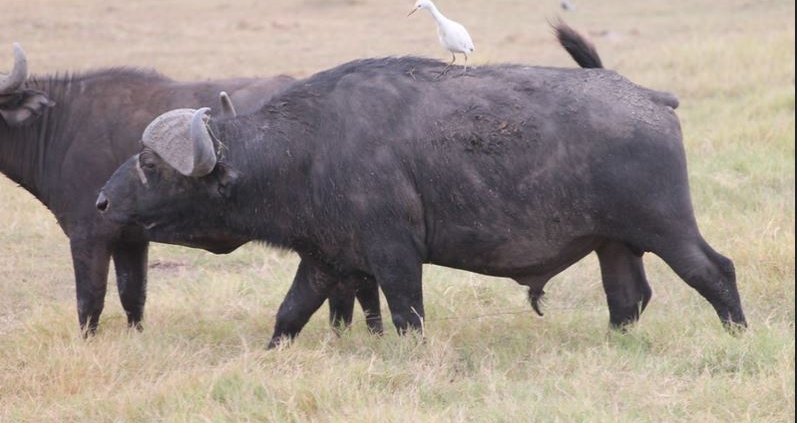 Leopards are faster animals when compared to any other in the big five being able to  approximately 58 kilometers per hour with complimentary hops of about 6 meters high, these animals can easily be mistaken for a female lion but the black and brown circles in their skin makes them different. Leopards are scientifically referred to as panthera pardus, unlike other big five members leopards are solitary animals seen in a company of each other during the mating and breeding periods.

Leopards are also predators who camouflage into the shrubs with a lot of ease while waiting for their prey like impalas, leopards in Amboseli national park are easily spotted lying on dried tree branches and in the short savannah grass dominated some regions of the park.

As a tourist visiting Amboseli national park to watch four out of the big five, the best time to visit the park is in the months of January and February and June September. Visiting the park in the months of April and many should be avoided as in these periods the park receives rainfall causing some regions of the park to flood for example the Palestine dried up lake.

Amboseli park is generally a dry and hot national park partly because it lies in the rain shadow of mountain Kilimanjaro, the park receives a minimum average daily temperature 27°C and maximum average daily temperature of 33°C which slightly vary throughout the year. Amboseli park is typically dry receiving an annual rainfall of 300 millimeters and rain fall is only received in the periods of April-May and November to December.

Where to stay in Amboseli national park