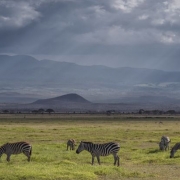 History of Amboseli national park
Amboseli national park the magical land of Kenya is lies in the North West direction of Mount Kilimanjaro on the border of Kenya and Tanzania, this park stretches over the area of 392 square kilometers which is dominated by acacia woodland, rocky thorny bush, swamps marshland and a Pleistocene lake. Amboseli national park is a home to a large concentration of wildlife estimated to be 80 different species including African elephant, African buffalo, impalas, lion, zebra, and wildebeest among other African animals, among the animals the park is more famous for habiting a large population of elephants. Amboseli national park is also a home to a number of birds estimated to be 400 species which include African swamp hen, Common redshank, Dickinson’s kestrel, Eurasian thick-knee, Greater flamingo, Hartlaub’s bustard, Lesser flamingo, Long-toed lapwing, Pangani longclaw, Rufous chatterer, Rufous-bellied heron, Spike-heeled lark, Steel-blue whydah, Taveta golden weaver, Von der Decken’s hornbill, Yellow-necked spurfowl and many more.
Amboseli National Park consists of a great scenery is created by the backdrop of mountain Kilimanjaro, the park has consist of many spots where animals and attractions in park can be spotted and they include observation hill where you can spot many animals.
Amboseli national park was officially declared a national park stretching over an area of 392 square kilometers in 1974 but that the park has a history dating back to the times before the coming of the British colonial rulers in Kenya.
The land covered by Amboseli national park was used as residence and grazing land for the Masai people, the Masai are very popular tribal group of people in both Kenya and Tanzania habiting on the boundaries of most protected areas found in north, central and southern region of Kenya and northern region of Tanzania. The Masai people are Nilotic ethnic group speaking the Maa language which is related to the Dinka, Kalenjin and Nuer languages, in Amboseli national park these people noticed at the foot hill of mountain Kilimanjaro and before the gazetting the area as a park they used the swamps as drinking spots for their large herds of cattle. It is in the Masai community where the amazing cultural encounters are carried out and on this activity you get an opportunity to observe the distinctive customs and unique dressing code o the Masai.
In 1883 joseph Thompson a European explorer and a Scottish geologist can into Kenya particularly the Masai land and he became the first European to ever cross the most feared Masai region, which was referred to as the Empusel, historically the masai people were the most hostile group of people in East Africa who welcomed no white man into their land. In Maa language (the Masai official language) the term Empusel is used to mean salty dusty place, joseph Thompson played a great role in scramble and partition era in Africa and because of his efforts Thomson’s gazelle and Thomson’s Falls, Nyahururu were named after him. Upon his arrival in the area (Masai land) he was astonished by the breathtaking and fantastic population of wildlife which amounted to huge numbers and the spectacular scenic backdrop of Kilimanjaro mountain and the landscape which created a great contrast between the arid areas of the dry lake bed currently known as lake Amboseli and a series of swamps.
In 1906, Kenya under the administration of British colonial administrator the Masai land was gazetted as a reserve in the names of southern reserve. This was done purposely to conserve the nature and animals most especially the large herds of elephants in this area from Masai poachers who ate them as meat and also killed for ivory to sell to Arab traders. Southern reserve was under the administration of the British government until 1948 when it was turned over to the local control as a game reserve, in 1948 the reserve was no more as it was declared and gazetted as a national park as a way of enforcing rules. The newly created national park was called Amboseli national park as a way of enforcing rules and regulations to protect the unique ecological system found in the park, the park derives its name from Maa language of the Masai meaning salty dusty referring to the salty dusty which arises when herds of animals run through the park most especially in dry periods.
Because of the unique ecological system hosted by Amboseli national park, it was declared a world heritage site (UNESCO SITE) IN 1991. Amboseli national park was under the leadership of Kenya wildlife service (KWS) until 29th September 2005 when the then president of Kenya Mwai Kibaki declared and passed the control of the park from Kenya wildlife services to Olkejuado county council and masai tribe as a way of the local benefiting and taking park in administration and operations of the park. Though this move was done in a spirit of promoting community conservation and for the benefit of the Masai community, some observers and critics saw it as apolitical move where Mwai Kibaki was seeking for political favors in advance a head of the presidential election. Transfer of administration powers to Olkejuado county council and Masai tribe diverted the park’s funds collected directly to the county council with shared benefits to the Masai communities living around the park currently legal challenges are still in the Kenyan courts.
How to get to Amboseli national park
Getting to Amboseli national park is very easy as you can either use road or air means of transport depending on your choice and time, by road that is by driving from Nairobi city to meshananai gate which takes about 2-3 hours on a 228 kilometers drive. You can also use Nairobi – Arusha route if you are going through Isinya using Magadi road in Nairobi city, it is a drive of 2-3 hours of this route of 240 kilometers.
By flying to Amboseli national park you use a domestic flight from jomo Kenyatta international airport to Amboseli airstrip.