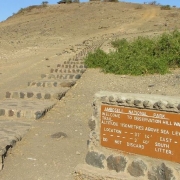 The observation Hill is found in Amboseli National Park. It is referred to as the Normatior in Masai language. The hill is the highest view point in the park located on the South Eastern side of Amboseli National Park in Kenya. It is a volcanic hill as it was formed through the volcanic activity of Mount Kilimanjaro as the tremors caused an upward displacement of part of the earth’s crust leading to the formation of many other volcanic hills and crater lakes around Mount Kilimanjaro.

The observation Hill is in the centre of the plain offering a wonderful relaxation on top of the hill as you enjoy the smooth cool winds from the East of Mount Kilimanjaro. It’s the only place that allows you to see everything going on around in the park including watching the rest of the other attractions around the park. Most of the tourists get to move out of their cars from this point since it’s the only place in the park where you get to move out of the car and take a walk or stretch.

There is a roof on top of the Hill, a few stalls to sit on and it is a good spot for lunch. As you climb up to the hill, there are easy stone steps to help you climb and reach on the top of the hill with a short easy walk up the natural staircase of about 100 steps. The view point from the observation point covers 360 degrees throughout the whole of Amboseli National Park. The observation Hill gives a good impression with a brilliant view during sunrise and sunset as you are on top of the Hill.

The observation point gives a great view of the landscape in Amboseli from the swamps where the Hippos and Elephants feed, the large-herds of Elephants move to and fro in the centre of the park, the flamingos, Buffalos, Giraffes, wildebeest, Burch ells Zebras, Lions and Gazelles are all very common and can all be seen while at this view point but the rest of some other wildlife species and the birdlife are visible with the use of Binoculars.

While standing at this view point, it offers you an opportunity to view the surrounding area throughout Amboseli National Park like the lakes such as lake Amboseli if the day is clear, the clear skies surrounding the lakes and swamps, the view of Mount Kilimanjaro, the Enkongu Narok marshes loved by the Hippos and Elephants, kioko lake as you go towards the north-west filled by noisy Hippos that spend their day immersed in water. There’s also the Amboseli lake a seasonal lake that fills with water in the rainy season, you also get to see the Ol Tukai in the east of the park area where the headquarters of the KWS rangers are found, the Ol Tukai lodge which was previously referred as Amboseli Lodge in the past(abandoned).

Booking in advance to visit the observation Hill in Amboseli.

The observation hill is the view point in the park which most of the visitors are attracted to and so they tend to come in large numbers to a have a proper view of the entire park while at this point, to secure a spot and others get to the hill to have a scenic view as they watch the sunrise and sunset.

Attractions near the Observation Hill in Amboseli.

Besides the attractions you get to see while in the Amboseli National Park at the top of the observation Hill, there are other attractions near the Hill and are also visible while at the Normatior Hill.

Hotels near the observation Hill in Amboseli.

Hotel facilities near the observation hill to make your trip enjoyable and fun filled while having a comfortable stay in a cool natural landscape in one of Kenya’s popular national parks.