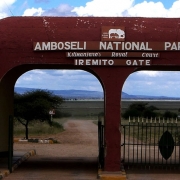 Park gates at Amboseli national park :  There are several ways to get to Amboseli National Park. The park has Five (5) major gates. The main gate being Kimana gate and sometimes it’s the only gate functioning along with other gates like, Airstrip gate, Meshanani gate, kelunyuet gate, Iremito gate, kitirua gate, IImeshanan. The shortest route to the park is “Email” it’s a small town on the Nairobi-Mombasa road (228km). The roads are tarmac beautiful and smooth during the dry weather and impassable in the wet season.

for one to have  their way through  the park gates at amboseli national park, all these gates is by a safari card only. This card can be obtained and loaded at the Meshanani gate at Amboseli National Park and at the park main gate off Iangata road.

The park has got a single airstrip for aircraft at Empusel gate and other airstrips can exist in Namanga town at the Kilimanjaro Buffalo lodge.

The park is open daily from 6:00am-6:00pm Both weekly and weekends. Public holidays inclusive. It’s important as well to note that there’s no entry of visitors allowed after 6:30pm.

In 2006, a number of 120,000 visitors were estimated to be visiting Amboseli National park from around the world. The park is mainly managed and governed by organizations such as Olkejuado country council, Kenya Wildlife Service and the Maasai community. The vast landscape offers a scenic view of hills like the Taita and Chyulu hills. These areas vary ecologically and the habitants formed in response to the varying levels of rainfall received per year. These are homes to buffalos, eland, zebras, wildebeests, and mainly Elephants since Amboseli is a place for a vast number of elephants.

Because of the long dry months and its desert-like complexion bring about a sparse vegetation and savannah wood-land type of vegetation.

Amboseli is well managed and monitored and that’s why the following rules were put in place to manage the conduct of the tourists and guests that enter the park for specific reasons to bring about order into the place, Security of the people and the Animals and to ensure its sustainability. These park rules include;

>Never leave the vehicle anywhere except at designated spots.

>Do not harass the animals in anyway.

>Always keep to the tracks.

>No off road driving and always give the animals the right way.